It's been a long time. Here is some catching up.

2013 was a productive year ... mostly for activities other than painting, but some painting got done. There were a few nice commissions, and I finished one piece. It's not well lit here, but: 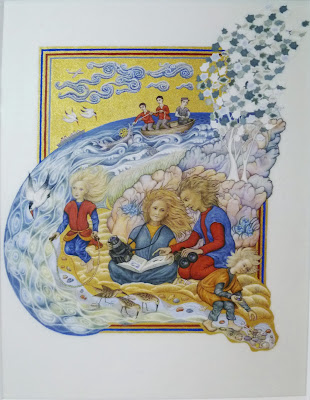 This was inspired by a family all wearing amazing long blond hair in different colours, and by the seventeenth-century Mughal miniatures found in the Emperor's Album, that the Singh twins also seem to have worked with. Those miniatures are always static, so I decided to see what happened if I put some fluid movement into this one – the leaves, hair and water. I also wanted to say something about nice Western tourists occasionally missing the point – they have spotted a tern, while the sailors in the background are (illegally) fishing up a sturgeon for caviar. The title was 'Caucasians at Gorgan Bay'; it's on the Black Sea (near the Caucasus) and I wanted to examine what we think 'Caucasian' means. Iranian? Georgian? Turkish? 'European'? White?

In terms of scale, the vellum inside the mount is 5 1/2 by 7 1/2 inches, and (for example) the two faces of the bird-watching couple plus hair strands are just under 1 1/2 inches across. I used shell gold and left it unburnished after a comment from a couple of friends that it looked more interesting as a sandy matt texture.

In other news, I have doubled up on studio spaces. One at home, and one chez my lovely partner. There have been a few tense moments when the lapis lazuli paint got left in one place or the other but it's been good for getting a couple of small pieces done, and perhaps in 2014 I can expand my ambitions :-)
Posted by Katharine at 05:29